You know I have my share….  Not only was this the song in my head during the Lumberjack 100, but it also sums up the last three weeks.
It all started with the Mohican 100.  It would be the 4th time I have competed in this race.  Each race I have moved up on the podium.  Finally, Churtle got the winning Turtle award!

The race itself was non-eventful.  I felt great for the first half of the race and then the heat set in and my body slowed down.  Fortunately I had a good enough lead that afforded me a gap that prevented any others from sneaking up on me.  That happens another day.
Next up the Stoopid 50.  This race has been on my radar for a long time.  It just has not fit in my schedule.  It is in State College PA and races along some great ridges.  I love to rock crawl and swoop along those ridges.  The day was perfect for me.  Not too hot, a little rain to cool things off when it did get hot, and best of all a perfectly cold creek to soak my body right at the finish line.
I had a great start at this race.  Being in front helped me stay ahead of the bumblers on the ridge and I got to ride it smoothly.  Just look at me smile.

Hiding in the front of the pack at start
I finished the race 1st place for women and 23rd overall.  My time was well better than what I expected.  4:44.  I was hoping for 5.  Rounding out the podium in 2nd and 3rd were my awesome teammates, Carolyn and Nikki.  Go team CF.

Some friends were concerned that I have been digging myself into a hole.  Maybe I shouldn’t do three long races in a row.  Haven’t I been expending myself since March with not much rest and going big.  Yes, however I am like a kid in a candy shop and just want to do it all.  Well until I can’t.  Lumberjack put the brakes on for me.
Traveling to Manistee MI for the third time was a mix of charm and not so charming.  It was a charm to spend time with some of my favorite peeps and it would be the last adventure for the threesome of Jeff, Roger and Cheryl.  It wasn’t a charm in that I became confronted with having to admit that I am fatigued.  Oh well, it happens the best of us.
Leading up to the race I did get some quality rest in and all my preparations leading to race day were dialed.  Morning of I felt relaxed and ready to put it out there.  That I did indeed do on the first lap of the 33 mile lap course that was done 3 times.  It was smooth sailing.  I felt as though I was chainless for the first time in a long time.  I cruised into the feed zone with Amanda after our smoking first lap and left with Amanda into the second lap.  Not five minutes into the lap I began to feel wrong.  My legs and HR were just not responding.  It was the weirdest thing.  Next dread entered my head.  I wasn’t sure if I could even finish the lap.  I willed myself around.  Got into the feed the second time around and was relieved to hear that she was about 10 minutes up and the rest were maybe 10 back.  Ok, I can do this I told myself.  Just hold on pull yourself together and have fun on the last lap around.  This lap proved better than the previous.  Maybe it was my head space.  There was no giving up now.  It would all be over soon and I would finish.  It seemed like forever to get to the aid station at mile 17.  Once there I stopped to pour water on my head.  I was getting really hot.  As I did Karen Potter blazed by.  I was her rabbit.  I was chicked.  Her energy left a mark on the trail.  I half heartedly attempted to chase, but soon gave up.  It was her day!

Congrats to all that finished that beast of a race and to Amanda for the win.  It can be so underestimated.  Don’t let it fool you. Thank you to Karen for allowing me to drain her water and ice cubes at the finish line to cool me down.  And another thanks to Carey for sharing her stash of cold coke.  I usually don’t ever drink coke, but I needed it that day.
The future holds a rest week and some.  After that I am again loading up on adventures to spread awareness of the Team CF cause and cross items off my bucket list.  I’ll let ya know how it goes.
Posted by Churtle at 10:19 AM 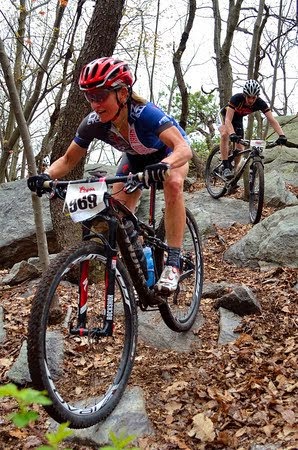